Angkor Wat is the largest religious structure in the world; an architectural and spiritual wonder built more than a thousand years ago by 50,000 artisans with 4,000 elephants over a 40 year period. (Yep, an astounding fact!)

Our trip highlighted the epic proportion of Angkor Wat symbolizing man’s creative ability, spiritual devotion and the peak of ambition. To see the wide expanse of the Angkor grounds would require more than a week, but the top sites (main temples) can be seen in three days. Anything less is not just sacrilege (as most will tell you), but also requires an unearthly amount of stamina, and resilience against the oppressive heat!

While most of this Khmer empire’s long forgotten city was constructed of wood, now long decayed against the test of time – brick or stone was reserved just for the Gods. The entire Angkor complex consists of over 1,000 temples! While some of these are in incredible shape, others have turned to ruins (almost rubble). To cover the area within three days, you must form a strategy based on the map below – small circuit (red) and grand circuit (yellow). 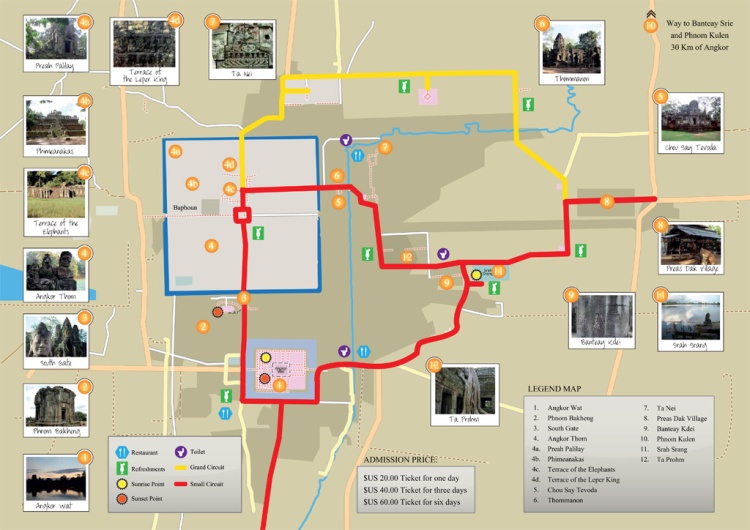 We mostly stuck to the Small Circuit; while we had the full intention of visiting a couple of temples on the Grand Circuit, we were quickly losing steam by the end of the second day…

Note: There is a high risk of getting “templed out” in one day! so we recommend planning over a few days for a better experience.

Angkor city was one of the largest and most advanced cities of the world, where the local people (known as Khmers) were skilled artisans, warriors and scholars.

The temple was designed by the Khmer king Suryavarman II to represent Mt. Meru – abode of the Hindu Gods. The temple was  dedicated to lord Vishnu, with five towering temple peaks shaped as lotus buds looming in the distance.

The wide square moat surrounding Angkor Wat represents the cosmic ocean, with a stonework sculpture of the Naga, seven-headed serpent considered a deity of the oceans and mountains, circling the entire perimeter of the grounds.

Walk the long sandstone causeway across the lake and make your way to the main access to the monument.

1)  Towers of Angkor Wat and the Main Temple

Before rushing in to the main tower within this temple, take the time to admire the long corridors, and fine bas-reliefs along the walls.

Apsaras carved along the walls

The hall of 1,000 Buddhas, hall of echoes, gallery of the bas-relief offer a glimpse into the fine work of Khmer artisans that has survived through all these years. 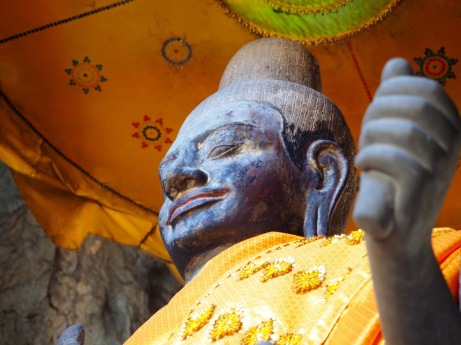 Approaching the central courtyard; and the beauty of the temple reveals itself! a group of domes in perfect harmony with the beautiful sky…almost meeting the clouds.

Climb the steep steps to take a quick stroll of the main temple that opens to a world of smiling Apsaras, and royal bathing pools .

Angkor Thom was the last capital city of the Khmer empire established by king Jayavarman VII. This is considered as one of the most enduring cities that went through several rulers, and the vast grounds include multiple monuments built through the years. We covered two main sites within this area; Bayon and the Terrace of the elephants, but before that…

A long causeway leading up to the entry tower is flanked by a row of 54 stone figures on each side. The demons (on the right) have a grimacing expression with bulging eyes and a military headdress.

While the gods (on the left) have a serene expression with their almond-shaped eyes and conical headdress. Some of the heads on these figures are new and have been restored based on the old form, since the original heads were either removed or stolen back in the day… 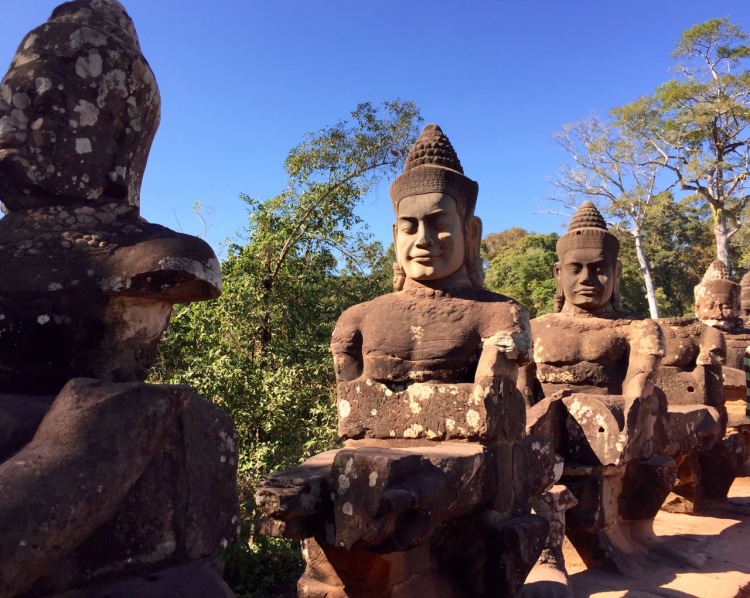 The main gate of Angkor Thom is probably the most photographed gate from Cambodia.

At the heart of Angkor Thom lies the Bayon, probably the most interesting temple of Jayavarman VII that highlights both the creative genius, as well as the inflated ego of this legendary king.

The Bayon includes 54 towers decorated with 216 enormous and smiling faces of the Buddha (Avalokiteshwara) that presumably bears more than a resemblance to the great king. 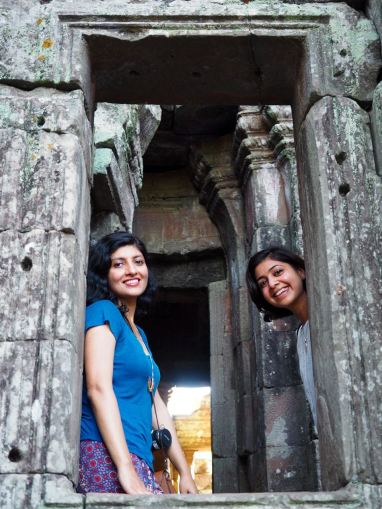 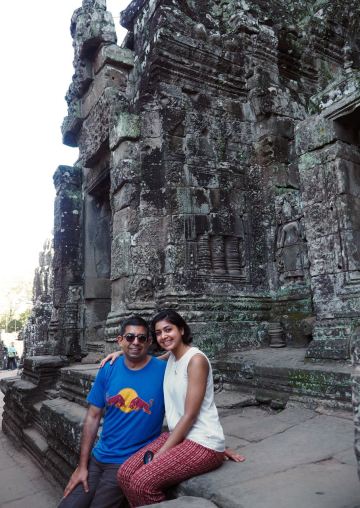 This is the one made famous in the Lara Croft – Tomb Raider movie!

The temple is mostly crumbling and the remaining walls lie in shadows of large trees that grow all around and through the site. Some of these trees are hundreds of years old! 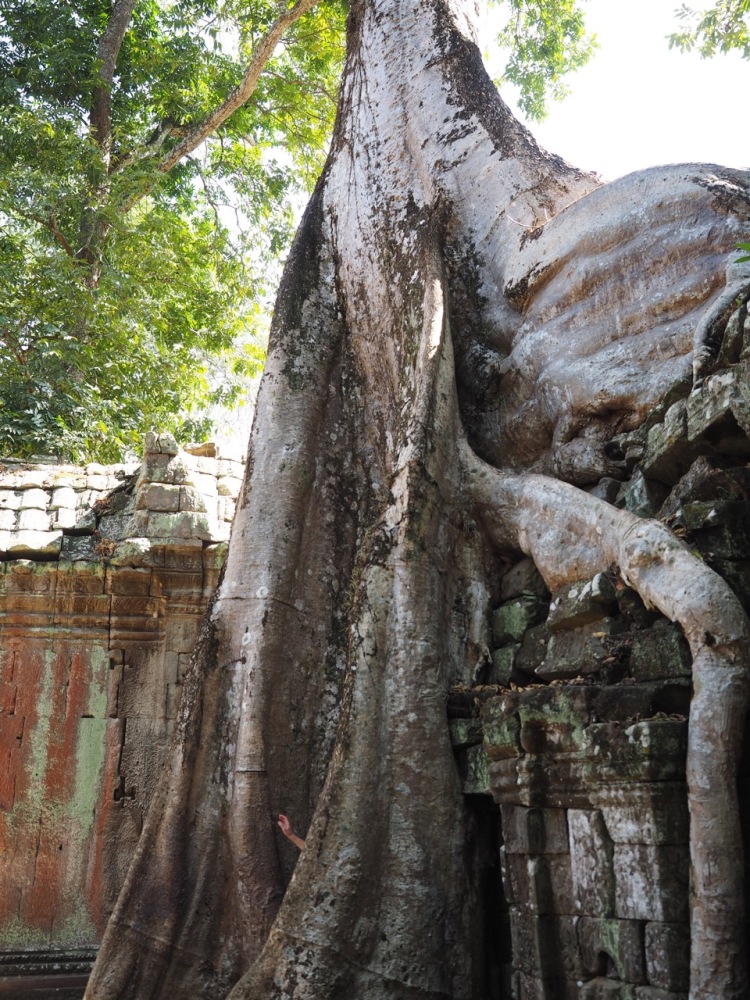 Walking through the temple site, we were reminded of how man conquers nature’s barriers to create structures, and nature once again slowly claims it back – very poetic indeed!

This was originally a Buddhist temple and built as a monastery of the king, dedicated to the mother of Jayavarman VII. The temple includes many towers and narrow corridors so be prepared to walk. 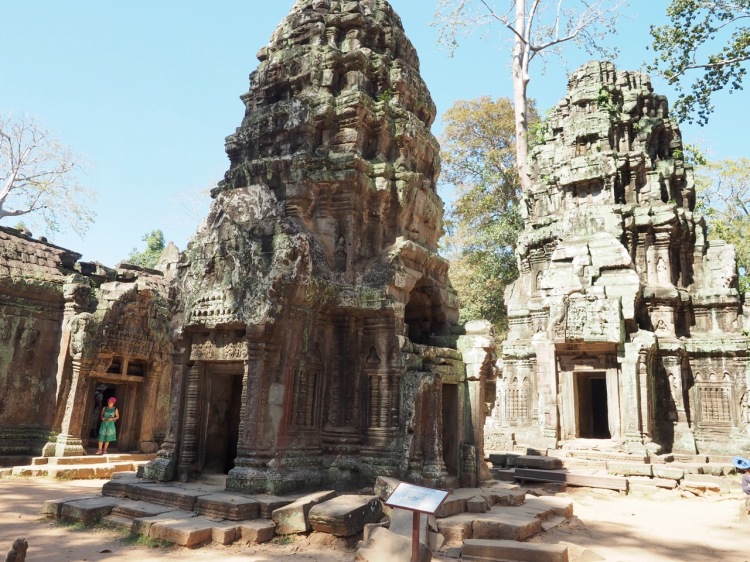 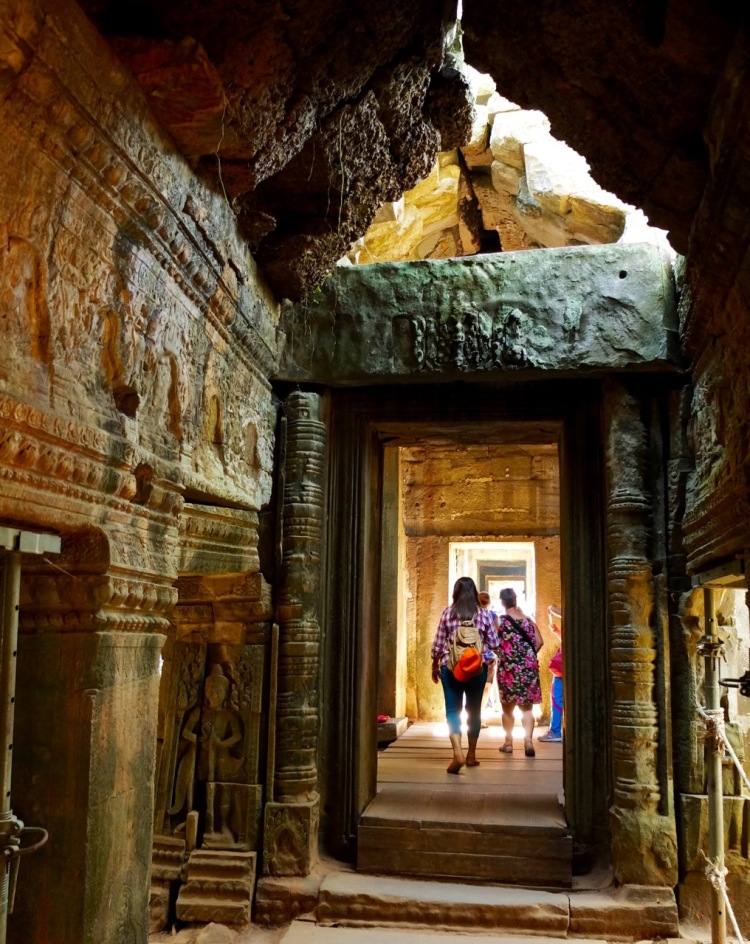 A greenish hue covers the temple in the afternoon as light filters through the leaves of all the canopy above and highlights the moss-covered stones; this definitely makes you feel like an explorer and helps you channel your inner Indiana Jones! 🙂

5) Terrace of the Elephants

This is a LOT of walking and we covered the vast expanse (while getting lost, remember the Indiana Jones spirit, yeah… ;)) and covered two areas – Terrace of the Leper King and Terrace of the Elephants.

The terrace of the Elephants is decorated with parading elephants all around the structure and was used as a giant viewing stand for public ceremonies. Standing here, imagine the grandeur of the khmer empire with huge processions with infantry, and chariots and of course elephants in honor of the king!

Walking north you can enter the Terrace of the Leper King. Legend has it that at least two of Cambodia’s kings suffered from Leprosy, and as such this terrace housed the royal crematorium for these kings. You can walk around this structure and admire the relief of at least five tiers of exquisitely carved Apsaras, kings, princesses and Nagas.

No visit to Angkor Wat is complete without a glimpse of the beautiful temple at Dawn. As most guide books recommended viewing sunrise, we planned our visit  to reach the premises at Dawn (read 4:30 am) and we were greeted by throngs of tourists grappling for the best site to dock their tripod in eager anticipation of the infamous sunrise. We clamored our way in and grabbed a spot for ourselves…

Now understand that the colors of the sunrise are highly dependent on the weather, and of course ours was timed with a cloudy morning

And that dear folks wrapped up our Angkor Wat tour of the top sights of the expansive temple grounds.

Some others that you could add: Banteay Srei and Kbal Spean 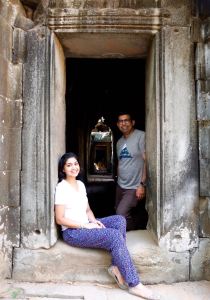 One thought on “Top Sights in Angkor Wat”