The old town of Hoi An feels like a museum of well preserved buildings; a unique blend of architectural style drawing on influences from China and Japan, with just the right dash of Europe. The wooden houses are painted in bright colors and decorated with hand-made lanterns in a myriad of colors, shapes and sizes. Old-style communist speakers hoisted along the main road play soft french music during late afternoons, transporting you to a bygone era. Open store fronts are flanked with smiling faces of local girls dressed in elegant Ao Dai made of flowing silk fabric in soft pastel colors…

Hoi An is the best shopping destination for custom clothing and shoes, gorgeous ceramic pottery, embroidered linens and bags, and beautiful artwork! More on this later…but first we must start on our self guided tour of the old town 🙂

The ancient town of Hoi An is one of the finest examples of a well preserved South East Asian trading port dating from the 15th – 19th century. This is largely due to its status of a UNESCO world heritage site since 1999, and a required entrance ticket costing ~120,000 VND for a foreign visitor (roughly USD 6). The ticket comes with 5 coupons that can be used to view any of the sites such as museums, old houses, temples, Japanese bridge, and night market. While the ticket is really valid for 24 hours, the guard told us that we could use it over a couple of days in case we were not able to see it all in one day… 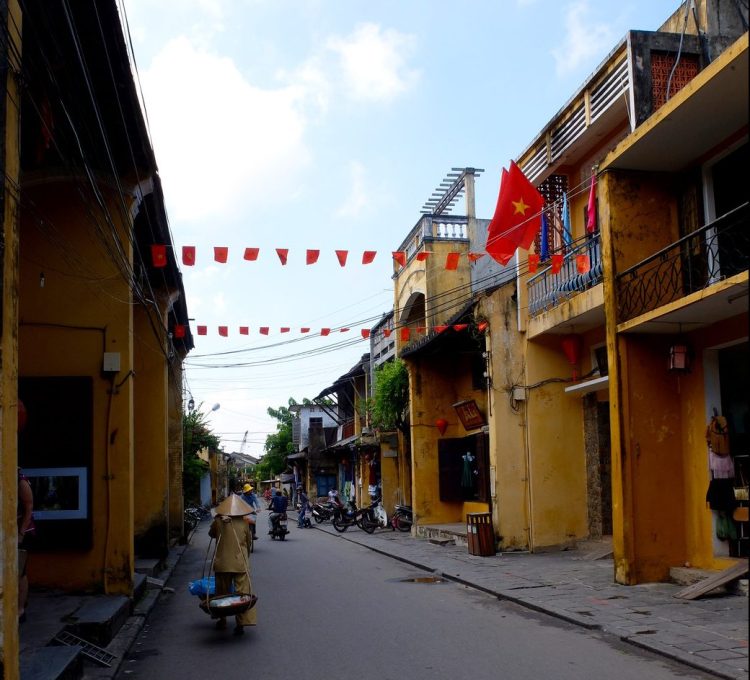 While there are so many sights to pick from, we chose the top locations from the following list: (choose at least one from each for this tour)

Let’s start walking, shall we? 🙂 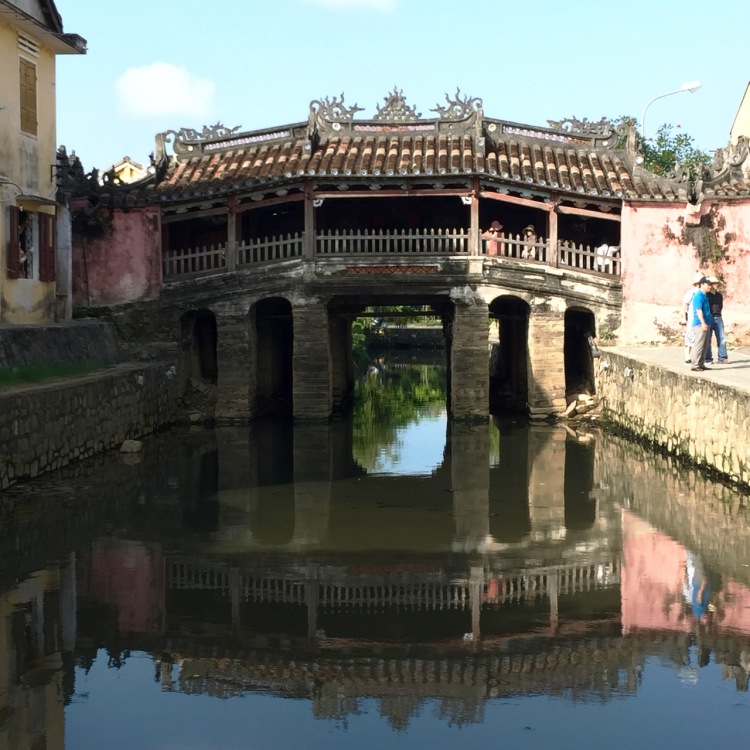 The image of this Japanese Bridge has become the iconic symbol of Hoi An over time; stop here for an obligatory photo! The bridge is free to cross, so don’t get this stamped unless you plan to visit the shrine located on the bridge.

This will seem like a small bridge in comparison to other cities but is a pretty sight for its architectural details, and a perfect reflection in the river. It was built by the Japanese community in early 1600s, and also holds a shrine to the Taoist deity of storms and weather. 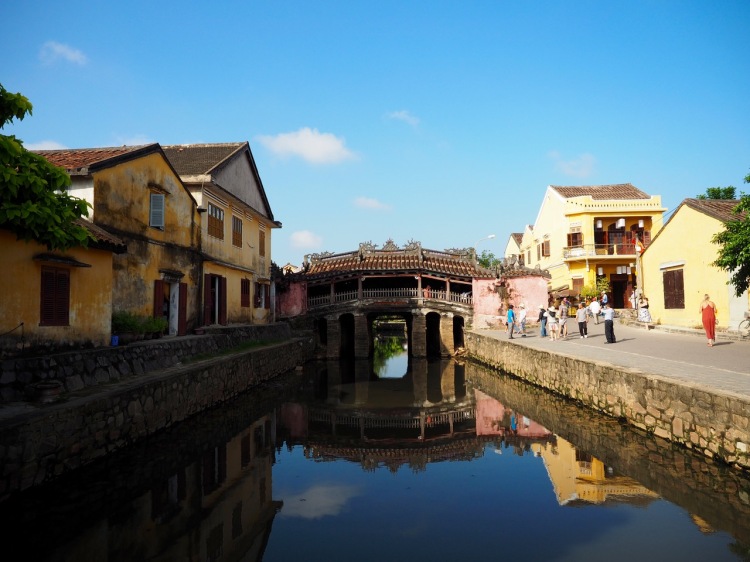 Hoi An is best experienced by foot; walking along wide and clean roads, you are likely stop quite frequently to take pictures of colorful house fronts like this one… 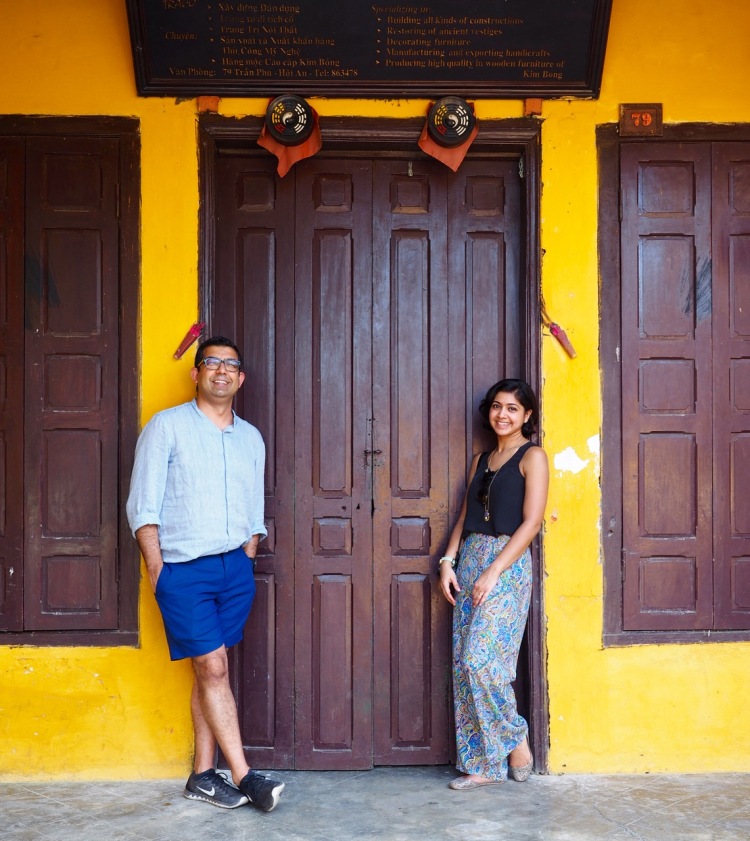 And another with cascading bright pink bougainvillea flowers…

Located on the banks of the Thu Bon River, the Central Market of Hoi An is certainly worth a look to get a slice of Vietnamese life. And you know, we have to stop by a local food market to find out the true flavors of the cusine!

The market is busy throughout the day with locals buying fresh food and wares in the morning. The negotiating over fish usually starts early as the fishermen drop their catch  and the market vendors and local buyers dive in to get the best fish.

The market can get very messy, and don’t be surprised by the sight! (fresh chicken below)

Inside the market there is plenty of live ducks and chickens tied together and ready for sale along rows of Vietnamese cooking ingredients. 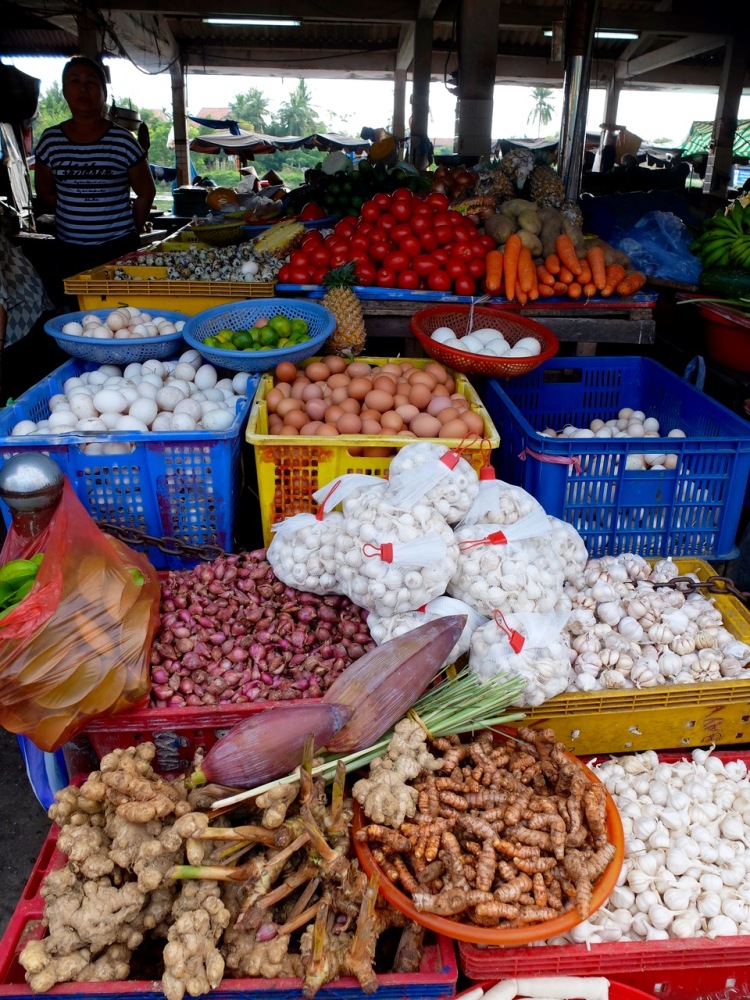 Next, walk over to the more pleasant side (east) to see the flowers, fruits and souvenirs. 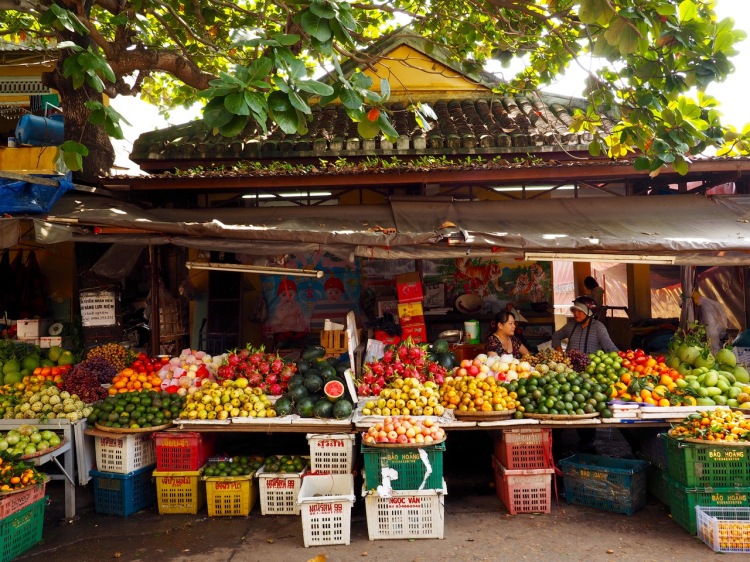 Merchants generally built some fine assembly houses in this region; they needed a place to get together and do business, and of course a shrine for good luck in travel and making money!

Phuc Kien hall was built by the Chinese (Fujian) in late 1600s, and is dedicated to Thien Hau – the goddess of the sea and protector of sailors.

Most of the Assembly Halls in the area are similar in terms of overall architecture, with an ornate entrance, central courtyard, colorful reliefs, and a temple or shrine at the back. The differences are in the finer details depending on who built (or restored) the building in terms of the colorful bas reliefs and shrines. 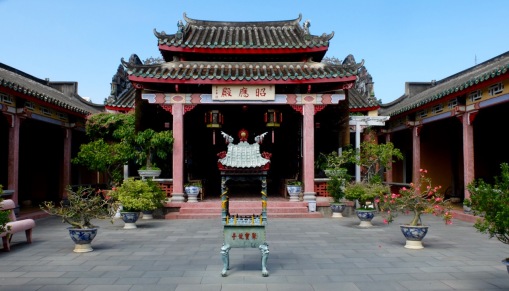 And each one of these halls is decorated with hundreds of tiny candles and spirals of incense that hang from the ceiling, creating a memorable sight and heavenly smell 🙂 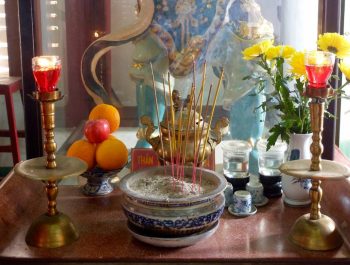 The spirals of incense with prayers written for good luck? 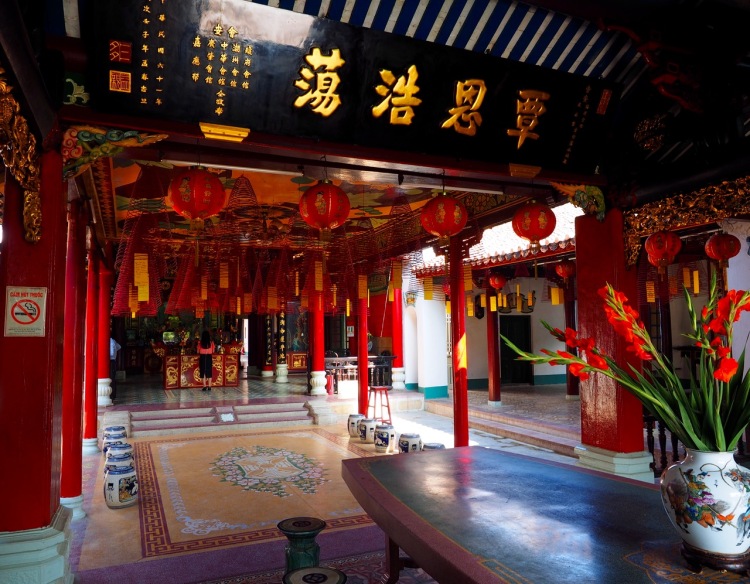 The hall at Phuc Kien was definitely a feast for the senses; incredible colors, sweet smell of incense and light music in the background. If you only have time for one assembly hall, let it be this one!

The old houses in the historical town were built by wealthy merchants several hundred years ago, and most of these doubled as shopfronts. Several of the merchants’ families still live in them and you get a ticket to take a tour of the old house (and, of course buy some of their wares while you’re there). However, the houses are really very interesting in terms of the architecture and use of space – take at least one tour!

We stopped by Duc An that once served as a traditional chinese medicine shop and also a bookstore. By the end of the early 20th century, at the time of the anti-French revolts, it also became a popular meeting place for patriotic intellectuals – can you imagine all the conversations and secret meetings that took place here?

Today, the house has wonderful pieces of old medicine cabinets and carved wooden furniture on the ground floor.

Another intersting feature in the old houses were the water markings of prior floods. The old town of Hoi An is prone to annual floods, as the town sits on low grounds and is surrounded by waterways, between mountain ranges. The water is known to rise upto two meters high in the town and ultimately the houses – so the residents would move all the furniture to the higher floors to protect during the flooding season. This regular feature led the houses having developed strategic pulley systems up the floor to quickly move the big items!

The communal houses or temples were mostly built in the mid-17th century by both the Vietnamese and Chinese people living in Hoi An.

Quan Cong was an outstanding Chinese general at the time and was renowned for his loyalty and sacrifice to the country. This temple was then built as a symbol integrity and justice. 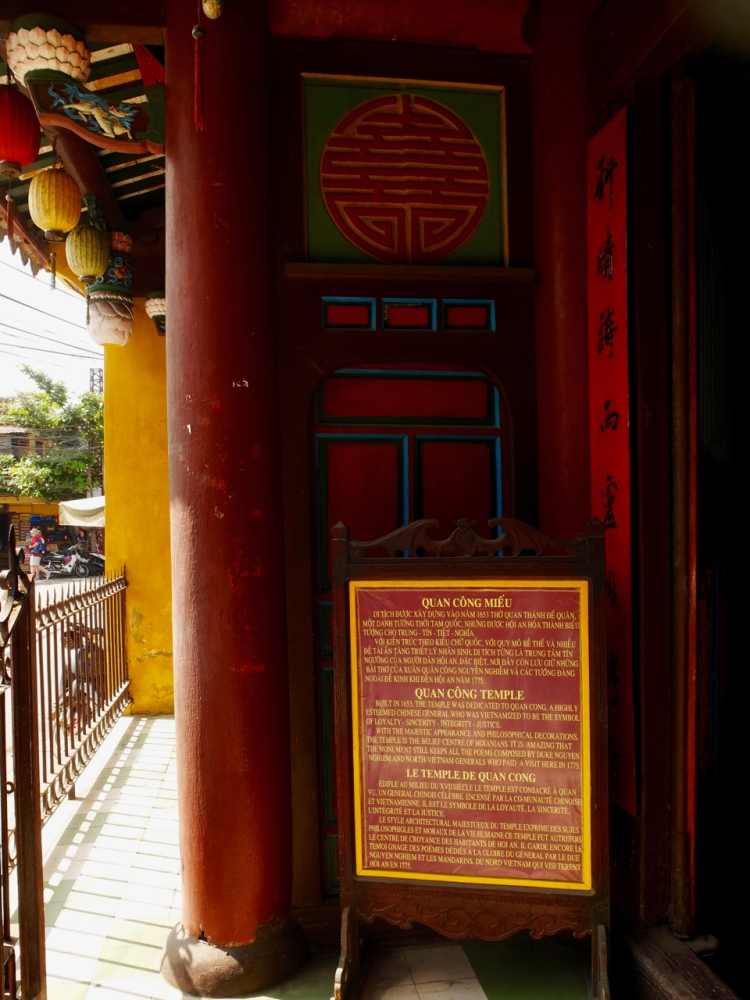 The temple had a pretty miniature bonsai garden with figurines and lotus flowers.

The place seemed so serene and beautiful, I made a small donation and got a good luck charm; and a picture with the temple keeper who had shown us around 🙂

Definitely stop by this museum on your walking tour, the house was even prettier than the relics inside! 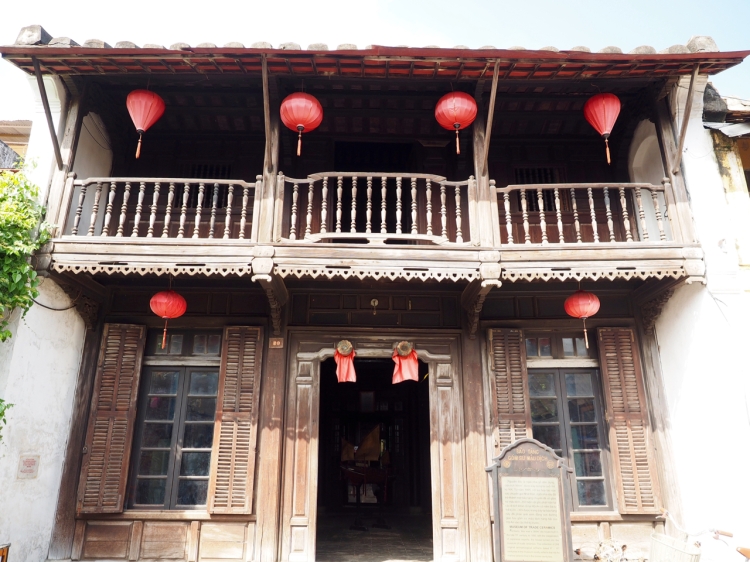 The beautiful building is constructed in the traditional Vietnamese architectural style; and is a two storey building with a courtyard and an anteroom.

Since the town of Hoi An was a big trade hub, the main items that were exported were pottery and, traded pottery from different nations, including China, Thailand and Japan.

The counrtyard has a lovely ceramic fountain of bright colors.

Walk up the narrow stairs to the top floor

And you will enter a room with cute windows, pretty lanterns and a balcony with a street view 🙂 a great picture spot! 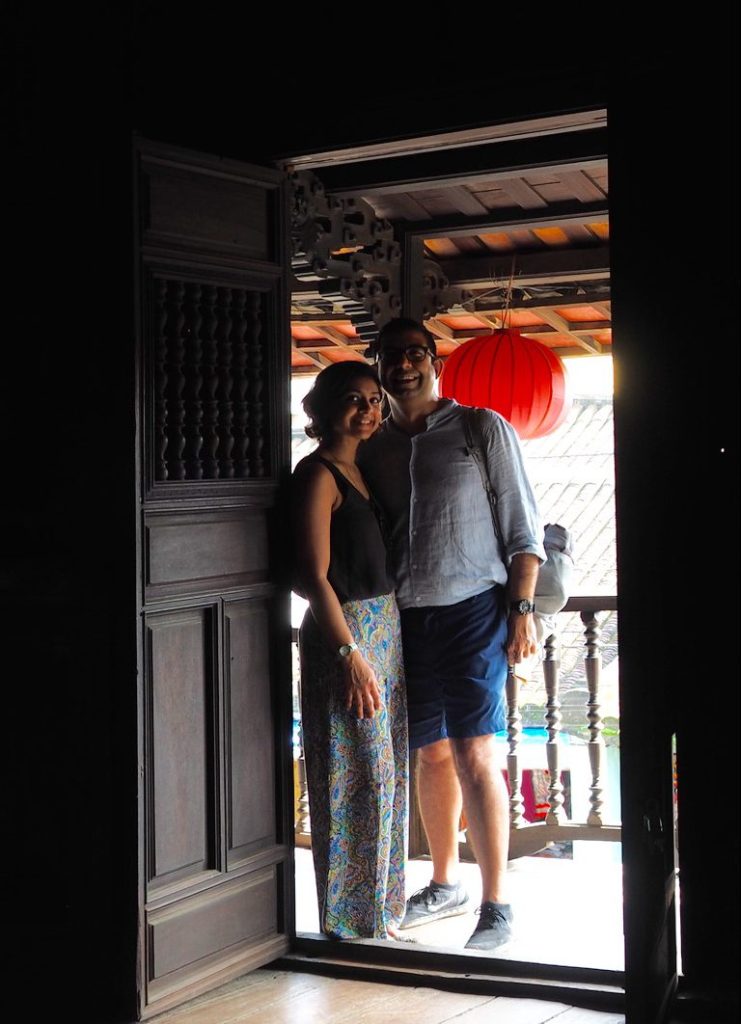 And finally, a bit of shopping!

The Handicraft Workshop a must visit, and trust us! you will want to buy everything!

The workshop is set in a 200-year-old building with an interior that is mostly a souvenir shop. 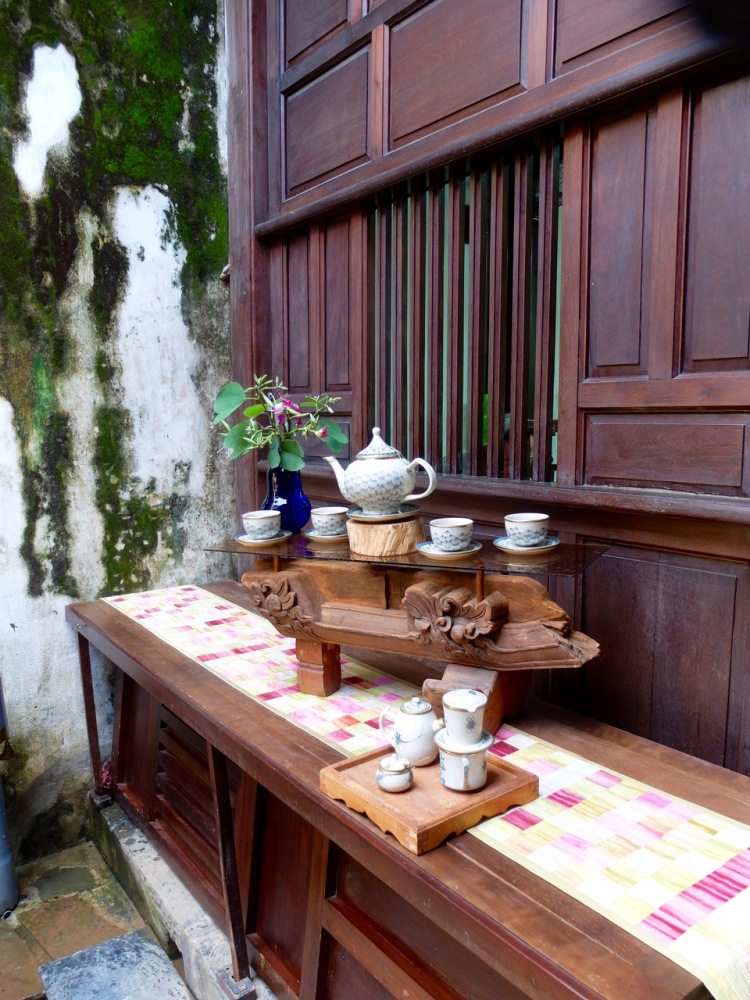 Walk in and you’re likely to see actual artisans at work.

The quality of the goods is quite high and the pieces here are worth the price that you won’t find elsewhere in town. There’s intricate work in metal, porcelain and soapstone, as well as larger terracotta pots and sculptures, quilts and embroidery on silk!

End the tour with the best and most perfect Banh mi!!!!! yummmmm

Now, off to the hotel to rest our aching feet…(foot massage!)

Hope you enjoyed the tour!! xo

One thought on “Walking tour of old Hoi An”